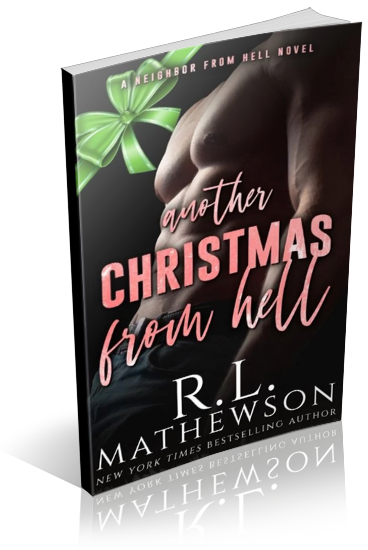 Bryce has been avoiding his brother’s best friend since they were children, but now that she was living across the hall from him, staying away from her was the last thing that he wanted to do in this holiday romantic comedy from New York Times bestselling author R.L. Mathewson.

He wasn’t in love with her.

This was going to be the worst Christmas ever.

It was time to move on.

Granted, Cayley would have preferred to wait until after Christmas, but with her best friend somehow managing to get her fired and evicted in the same day, she’s left with no choice but to rent the apartment across from the one man that really didn’t seem happy to see her.

More than fine because if she could handle her best friend making her life a living hell and an ex-fiancé that was determined to get her back, then she could handle the man that was letting his past destroy them both.

New York Times Bestselling author, R.L. Mathewson was born in Massachusetts. She’s known for her humor, quick wit and ability to write relatable characters. She currently has several paranormal and contemporary romance series published including the Neighbor from Hell series.

Growing up, R.L. Mathewson was a painfully shy bookworm. After high school she attended college, worked as a bellhop, fast food cook, and a museum worker until she decided to take an EMT course. Working as an EMT helped her get over her shyness as well as left her with some fond memories and some rather disturbing ones that from time to time show up in one of her books.

Today, R.L. Mathewson is the single mother of two children that keep her on her toes. She has a bit of a romance novel addiction as well as a major hot chocolate addiction and on a perfect day, she combines the two.

If you’d like more information about this series or any other series by R.L. Mathewson, please visit www.Rlmathewson.com

I’m organizing a blog tour for Another Christmas From Hell by R.L. Mathewson, an Adult Romantic Comedy novel. There are 25 spots on this tour which will run from November 7th to November 11th, 2022. Posts will consist of reviews, guest posts, interviews, and excerpts. There will also be a tour giveaway. Review copies will be available in ebook formats.

Note that signing up does not guarantee a spot on the tour.
Those selected for the tour will be emailed in mid October with their tour date.
The tour schedule will also be posted on this page.