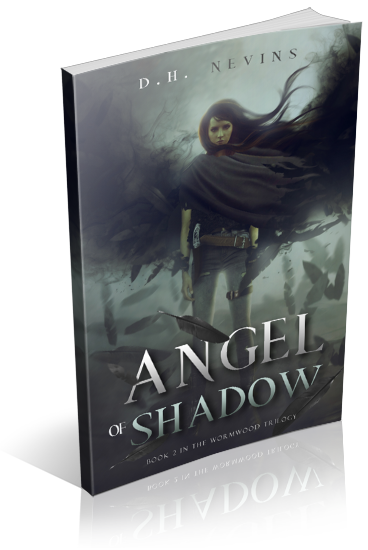 D.H. Nevins hurtles you into a world of half-angels, demons and tormented love in this driving, dystopian sequel to Wormwood.

Half-angels, known as Nephilim, have all but destroyed the surface of the Earth. Yet for Kali Michaels, her life is now much more complicated than simply surviving. Grappling with her own powerful identity, she worries her connection to the world of Shadows could destroy those around her.
And what if she hurts Tiamat Wormwood, the Nephilim outcast who has given everything to save her? Tiamat and Kali know they have no future—not when outside forces and Kali’s own power push both the humans and the Nephilim to the brink of extinction.

As she fights to stop the inevitable, she is led to question who her real enemies are, and whether the ultimate threat may actually be herself.

I am organizing a book blitz for Angel of Shadow by D.H. Nevins, a New Adult Dystopian Fantasy novel. The blitz will run from January 29th to February 5th, 2018, you can post on any day during this window. There will be excerpts available for your post, and every participant will be able to post the blitz-wide giveaway if you wish – giveaway prize(s) courtesy of author. Social media sites are welcome.

An email with the complete post info including promo items and giveaway details will be sent to all participants on January 26th.
HTML will also be provided.