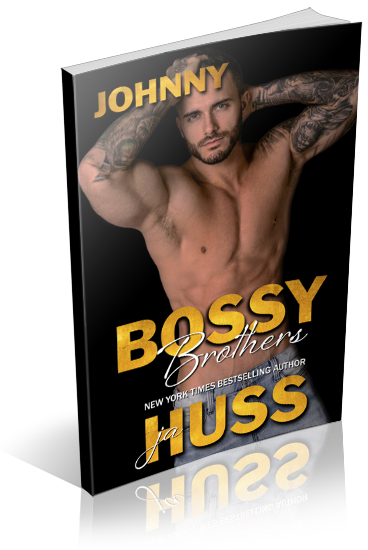 Bossy Brothers: Johnny features a prince saving his princess from a life of hell, one or ten romantic gestures from a tattooed bad boy, swimming with glowing dolphins in the Bahamas, and secrets so deep everyone almost drowns. Bossy Brothers: Johnny is book three in the series and can be read alone but should be read in order.

When my father ‘died’ five years ago I took over the ‘family business’. But when I say business, I really mean secret society. Or cult. Or militia. Hell, let’s keep it simple and call it the mob.

It’s just not that mob.

It’s much darker, much dirtier, and much more dangerous than any old everyday mob.

And I was perfectly fine with my role in life for a long time. But now my brothers are involved and I need to get them out.

When I found her helpless, nearly-naked, and chained to a wall on an island prison I had no intention of being her Prince Charming. But then I found out she had a dirty, dark, dangerous secret that could solve all my family problems.

I was just going to use her. Play her. Tell her everything she wanted to hear.

I never planned on baring my secrets to her in a midnight confession and I certainly never expected her to see past the dark filth inside my soul and find the man underneath.

She wasn’t supposed to be the princess I wasn’t looking for.

And now I will do anything—even use her evil secret to take down thousands of people—to save my brothers and get what I want.

I am organizing a release blitz for Johnny by J.A. Huss, an Adult Romantic Suspense novel. The blitz will run from September 30th to October 4th, 2019, you can post on any day during this window. There will be excerpts available for your post, and every participant will be able to post the blitz-wide giveaway if you wish – giveaway prize(s) courtesy of publisher. Social media sites are welcome.

An email with the complete post info including promo items and giveaway details will be sent to all participants on September 27th.
HTML will also be provided.