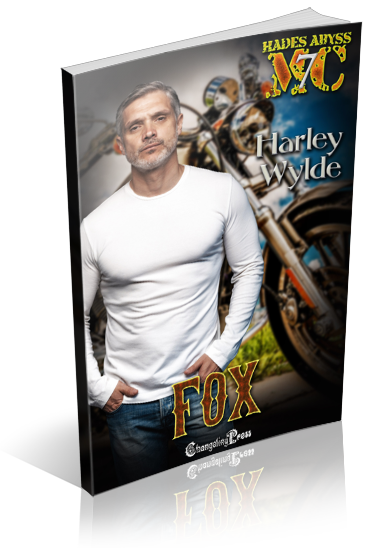 Raven — I learned the hard way not to trust anyone. First the men who’d hurt me, and then my mother when she’d turned her back on me. I had no one. Was it any wonder I didn’t think I had a reason to keep living? A good Samaritan had other ideas, landing me in a psychiatric hospital. Too bad the guards were every bit as evil as those men I’d trusted.

I thought I’d die alone. Unwanted. Unloved. Forgotten. Until the Hades Abyss MC came to take me away. They claim my father sent them, except I’ve never met him. Don’t even know his name. I’d try to run, but what’s the point? Besides, there’s one man who makes me feel safe. Fox. It doesn’t matter that he’s older than me. When he holds me, I know nothing will ever hurt me again. I just didn’t count on losing my heart to him.

Fox — Breaker brought Hatchet’s daughter to the clubhouse, and the moment I looked into those vacant eyes, I knew she’d been badly broken. Some part of me wanted to fix her. Put the pieces back together. Watch her eyes light up and see her smile. She thinks she’s dirty, that no one will ever want her. She’s wrong. I want her. I even want the baby growing inside her.

Never thought I’d find the woman meant to be mine. Now that I’ve had Raven in my arms, chased away her nightmares, kissed her tears away, I know I can’t let her go. I’ll make her mine — the baby too — and I won’t let anyone stand in my way.

WARNING: Fox is part of the Hades Abyss MC series. Be warned there are adult situations and language, violence, darker themes that may trigger some readers like suicide and assault. Guaranteed Happily-Ever-After, no cheating, and no cliffhanger!

I’m organizing release week blitz for Fox by Harley Wylde, an Adult MC Romance novel. The blitz will run from August 20th to August 24th, 2021, you can post on any day during this window. There will be excerpts available for your post, and every participant will be able to post the blitz-wide giveaway if you wish – giveaway prize(s) courtesy of author. Social media sites are welcome.

An email with the complete post info including promo items and giveaway details will be sent to all participants on August 17th.
HTML will also be provided.