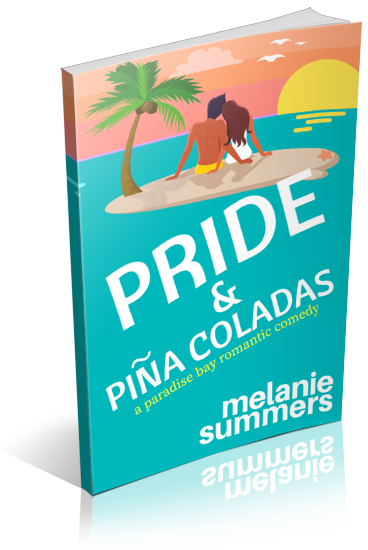 From best-selling author Melanie Summers comes a enemies-to-lovers tale that’ll have you laughing, swooning, and blending up a pitcher of fruity girl drinks…

I’m Nora Cooper—single woman about to turn thirty, wildly unsuccessful plant fanatic, and event planner at Paradise Bay Resort. My shot at ‘the big time’ has finally arrived—the resort is hosting the World Bartender Championships and I’ve been asked to head up the hospitality team.

There’s only one big problem. And his name is Theo Rojas. You’ve heard of his family—they own Rojas Rum (and about 200 other premium liquors, some of which may be on your shelf right now). As the major sponsor of the event, Theo has decided to be onsite, micromanaging every second of the competition.

He’s stuck up, rude, and arrogant (and a bunch of other adjectives I had better not use). He also seems to have added ‘make Nora’s life absolute hell’ to the top of his to-do list.

Too bad for Mr. Grumpy Chinos because he doesn’t know who he’s dealing with. I’ve taken on far worse foes than him. And if he thinks he’s going to get the best of me, he’s in for a wake-up call.

So when we find ourselves stranded on a private island overnight, I’m determined to put him in his place once and for all.

Only somehow, instead of continuing our constant sparring, we wind up kissing. And I did NOT expect him to kiss like that.

And now I have totally forgotten all the nasty things I was planning to say to him. Something about him being arrogant, right?

Gah! Someone please send help because I absolutely CANNOT fall for this guy…

I’m organizing a release blitz for Pride and Piña Coladas by Melanie Summers, an Adult Romantic Comedy novel. The blitz will run from September 22nd to September 26th, 2022, you can post on any day during this window. There will be excerpts available for your post, and every participant will be able to post the blitz-wide giveaway if you wish – giveaway prize(s) courtesy of author. Social media sites are welcome. ARCs are also available for blitz participants.

An email with the complete post info including promo items and giveaway details will be sent to all participants on September 19th.
HTML will also be provided.