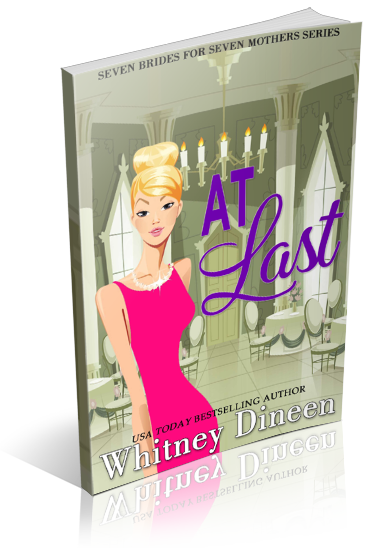 Queen Charlotte of Malquar has been hard at work setting up all her children, but so far, she’s been unable to find someone for Sophie.

Princess Sophie was supposed to be the second royal sibling to marry, but she broke her engagement when she found out her fiancé was cheating on her.

Sophie has all but given up hope of finding her own fairytale ending. That is, until a mystery bouquet of roses shows up at the palace. The note says they’re from Arlo Hammond. After years of pining for the man she thought was her everlasting love, Sophie finally released all thoughts of Arlo, only to have him show up again thirteen years later. Why?

Will Arlo’s explanation win Sophie’s forgiveness? Will she give him another chance and find her own happy ending at last? Or will the heartache of the past be too much to forgive?

Find out in the final installment of Dineen’s bestselling and deliciously romantic Seven Brides for Seven Mothers series!

I’m organizing a release week blitz for At Last by Whitney Dineen, an Adult Romantic Comedy novel. The blitz will run from February 1st to February 5th, 2023, you can post on any day during this window. There will be excerpts available for your post, and every participant will be able to post the blitz-wide giveaway if you wish – giveaway prize(s) courtesy of author. Social media sites are welcome. ARCs are also available for blitz participants.