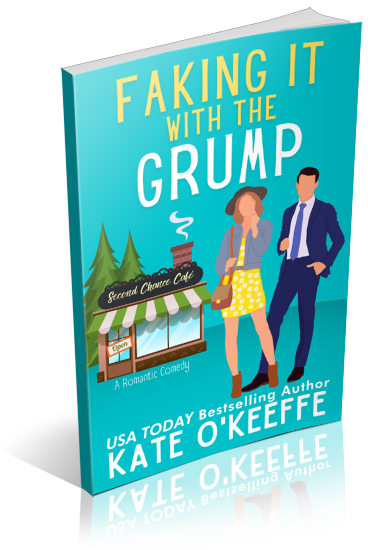 He’s grumpy, boring, and thinks it’s okay to wear a suit and tie to a smalltown bar full of lumberjacks. But when I kiss him? Let’s just say I wasn’t expecting THAT.

It’s one thing to be dumped by the huge Hollywood star you thought you were going to marry. It’s quite another to move back to the small town you’re both from.

As a booby prize for being shown the door by Dex Ryan, everyone is trying to set me up with their son, their nephew, or their long-lost cousin’s gardener. Either that or they’re throwing me pitying looks that say, “You’re a big loser.”

I’m not going to put up with their patronizing sympathy anymore.

The fact that despite appearances, he’s gorgeous and doing weird things to my blood pressure doesn’t mean a thing.

Hunter’s Creek, population next to nothing, is the reason I work all the time. I’m solely focused on buying the town’s lumber mill so I can go back to NYC and get my big promotion. This small town is a means to an end. Nothing more.

That is until the prettiest girl I’ve ever seen superglues her lips to mine in an unexpected and very public way. She’s not the kind of woman I usually go for with her boho dress and ankle boots, but that kiss…

I’m disappointed when she comes up for air and tells me it’s all for show. But if Harper Cole wants me to be her fake boyfriend while I’m here in town, who am I to turn her down? Being attached to a local might ingratiate me to the townsfolk and make my job that much the easier.

After all, dating Harper can only be make believe. Nothing more. Not when my entire future is at stake.

Faking It With The Grump is a grumpy-sunshine, opposites attract, fake relationship romance set in the small town of Hunter’s Creek, Washington. It’s the first book in the new Second Chance Café series. Each book follows a different sister’s love story and can be read as a standalone novel or as part of a series.

I’m organizing a release blitz for Faking It With the Grump by Kate O’Keeffe, an Adult Romantic Comedy novel. The blitz will run from March 14th to March 18th, 2023, you can post on any day during this window. There will be excerpts available for your post, and every participant will be able to post the blitz-wide giveaway if you wish – giveaway prize(s) courtesy of author. Social media sites are welcome. ARCs are also available for blitz participants.